First job today was an “A Ticket” which is an urgent ticket that requires immediate action. A tree had fallen across a well used path next to the river near Tarr Steps and this needed to be cut up and removed as quickly as possible.

Tools were loaded into the Land Rover, chainsaws, PPE, spare fuel and chain oil and hand saws for pruning the smaller branches.

Once on site we had to drive down the footpath to the tree and then unload the tools ready for work and put on the PPE. 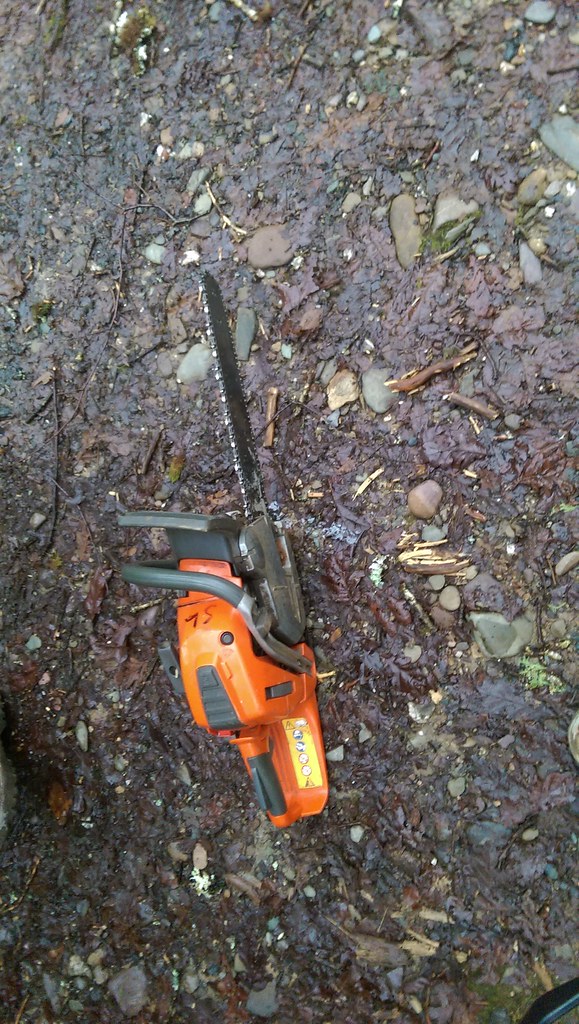 Chainsaw leggings, gloves and helmets were required and then work could commence. The tree had to be assessed to see where the various stresses and weight bearing limbs were to ensure cutting could be carried out safely. 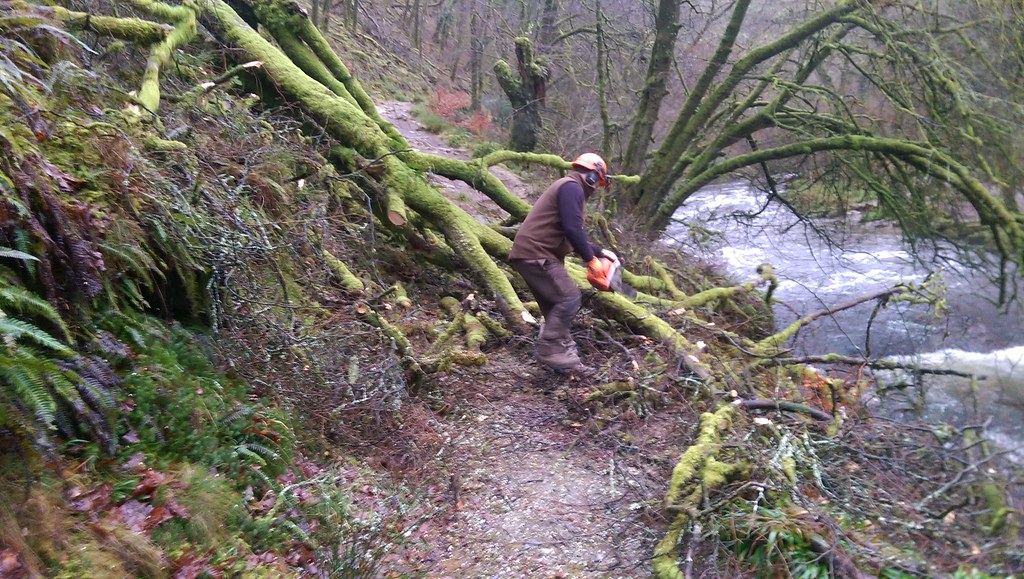 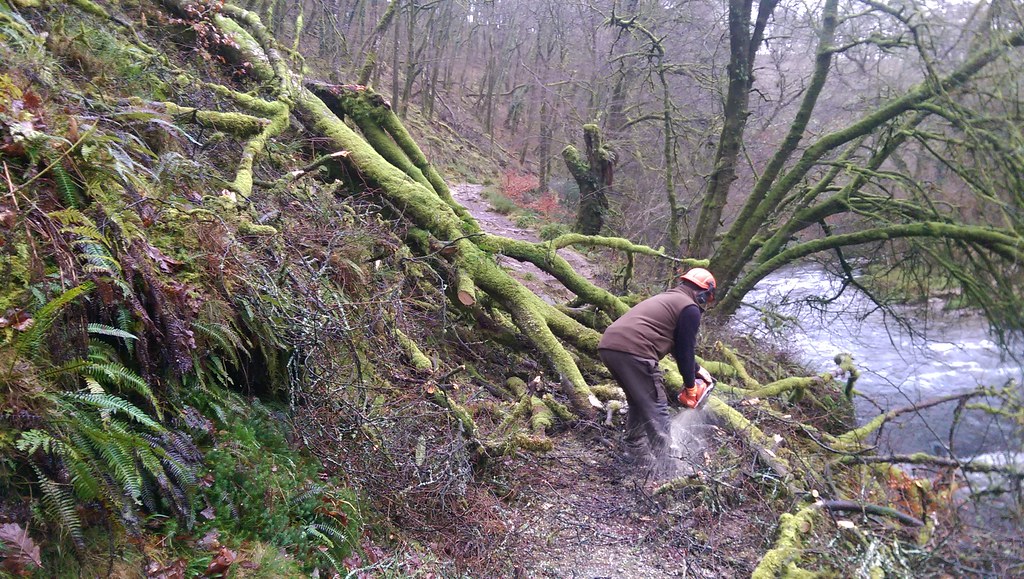 The rough brash that had come down with the tree was cleared by hand, picking it up and putting it off to one side of the path. This also has the added benefit of creating habitat piles for invertebrates. 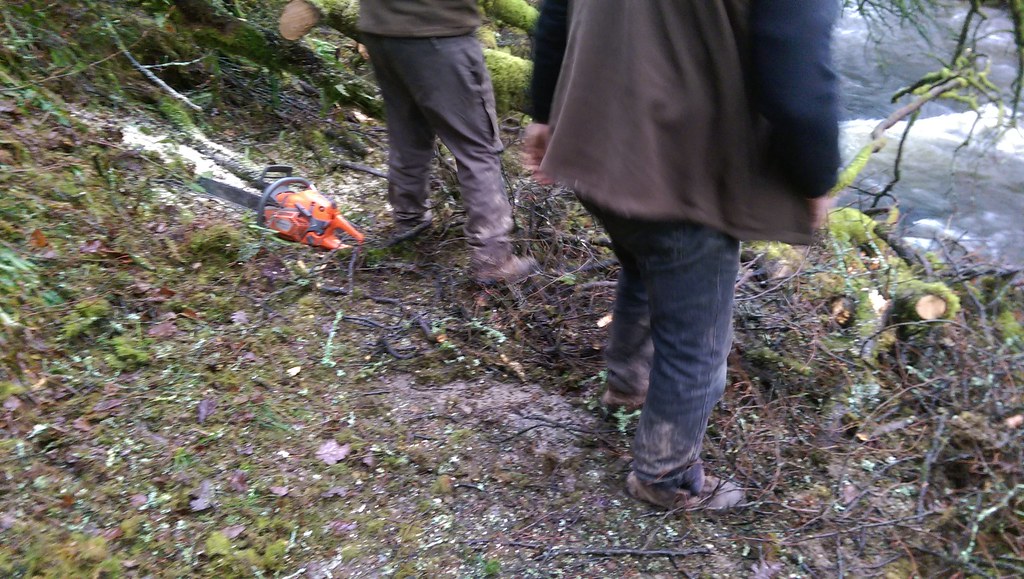 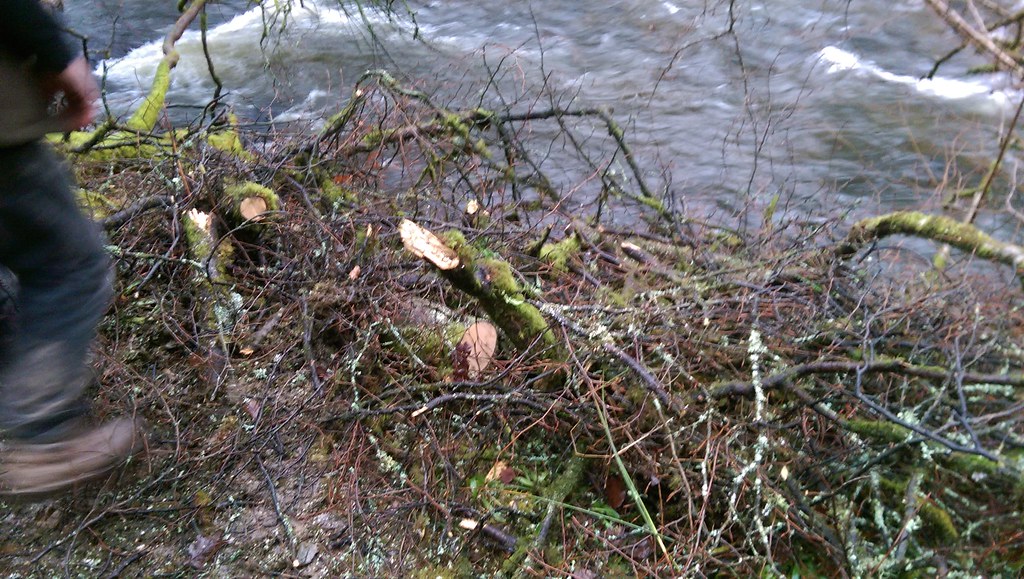 The tree was methodically cut up and the larger sections of trunk piled with the brash at the side of the path to create habitat piles. 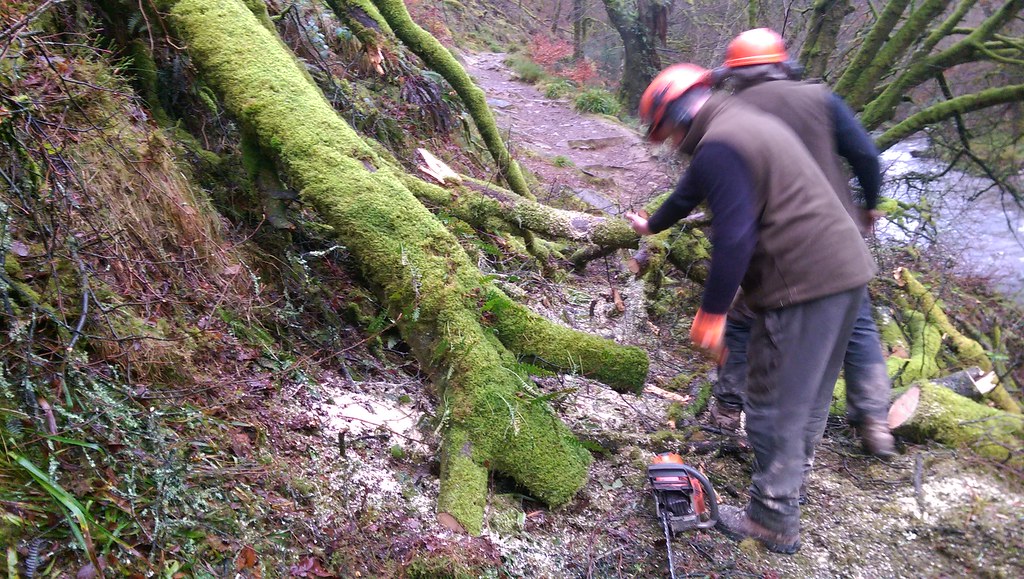 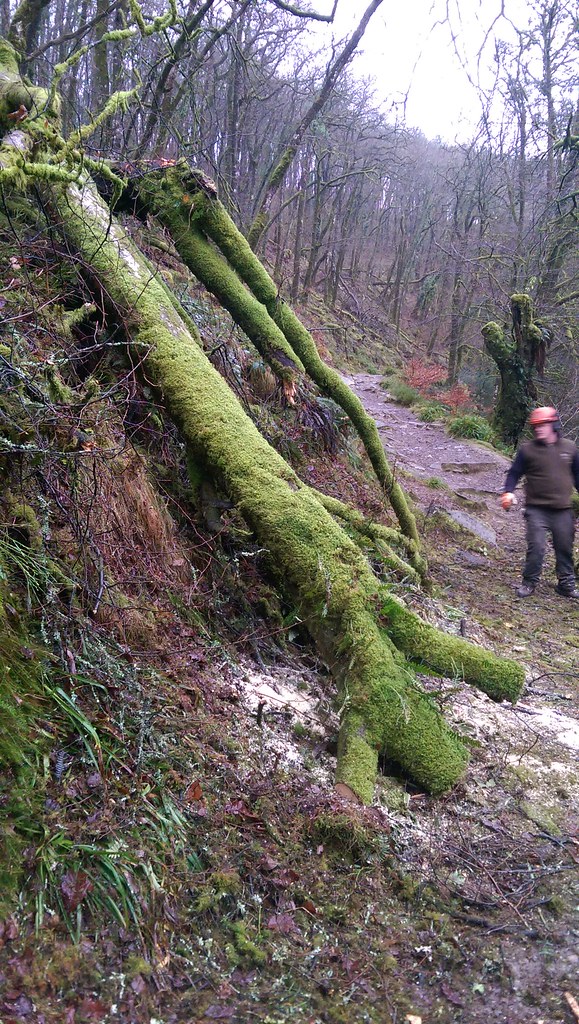 This eventually left the path clear for walkers 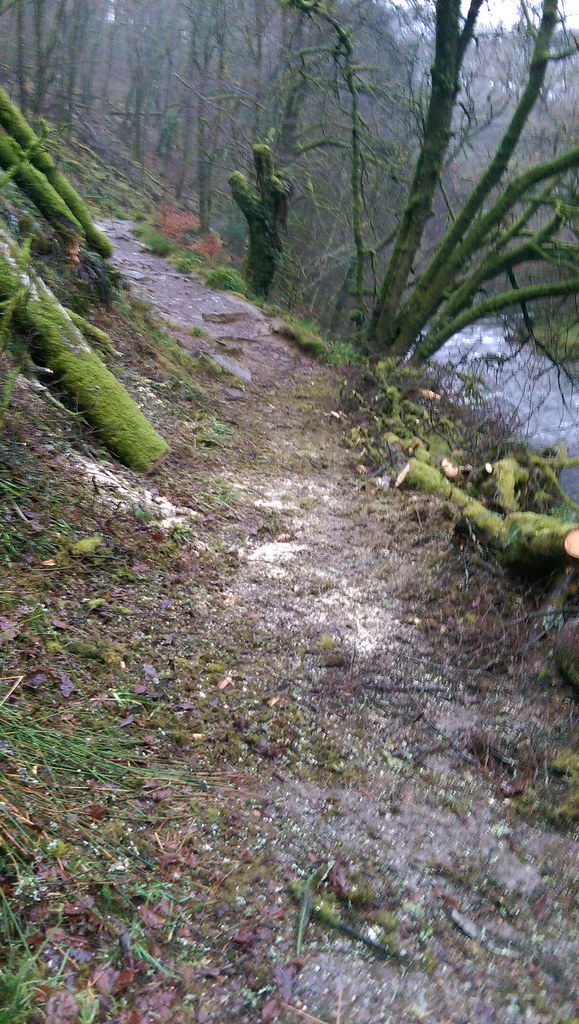 We headed back to the yard to pick up some more job tickets.

Two gates needed replacing, the first was on a steep field and the second down a narrow track, this meant we needed to take the Mule on a trailer as the jobs were quite a way away but needed a small vehicle to access them.

The Mule is an excellent vehicle for covering difficult terrain and does not cause significant damage to grassland, even after long periods of rain.

The first gate was broken and required replacement. 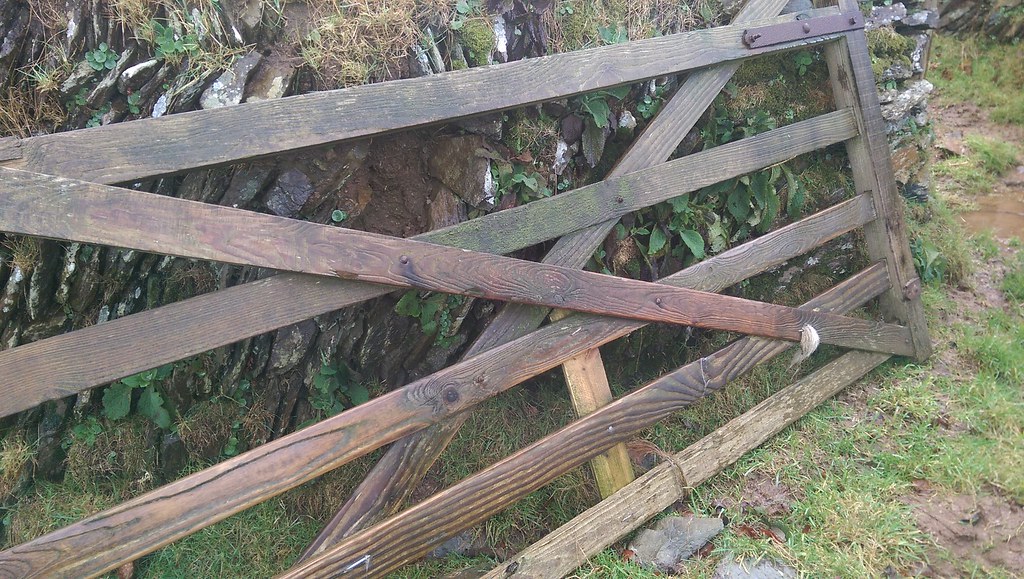 We checked the new gate against the opening to ensure it would fit correctly.

Straps were attached to the new gate by hammering them into place and then using quick-release clamps to hold them whilst the bolt holes are drilled from each side. Bolts are then driven through with the domed heads on the side people and horses will be passing to avoid clothing snagging or injury. 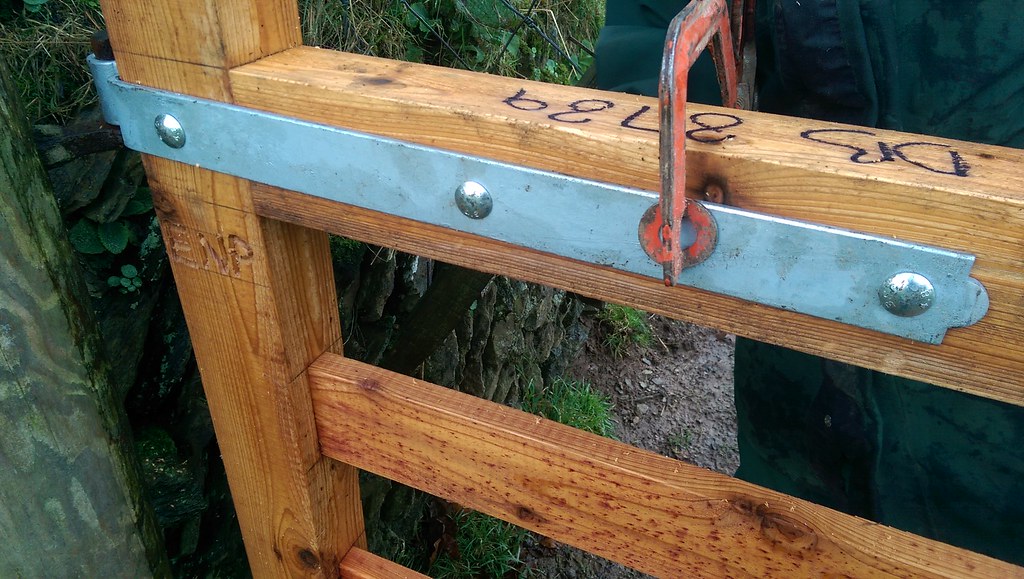 The gate was hung on the old hangers. 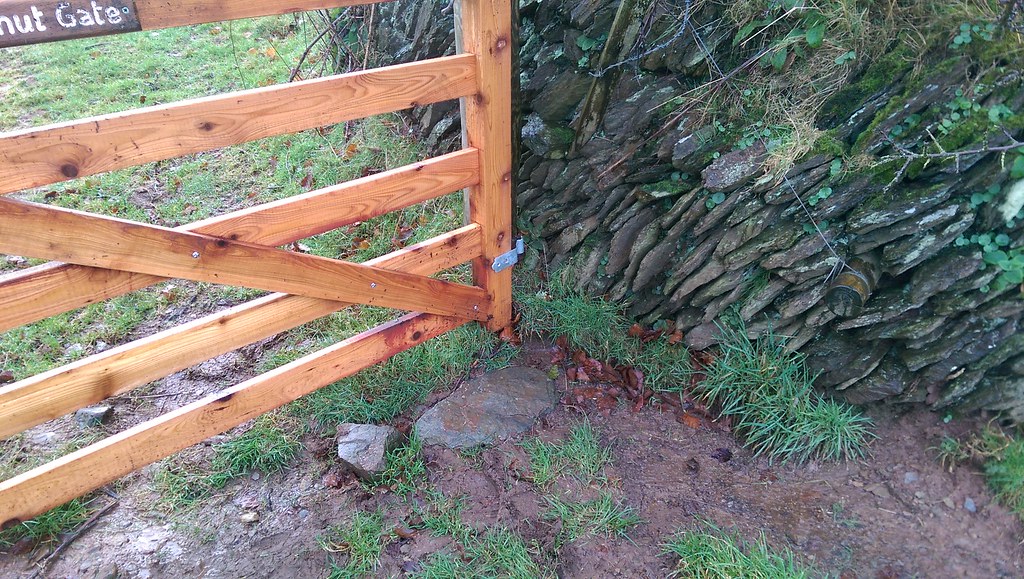 We tested the gate to ensure it closed as expected. 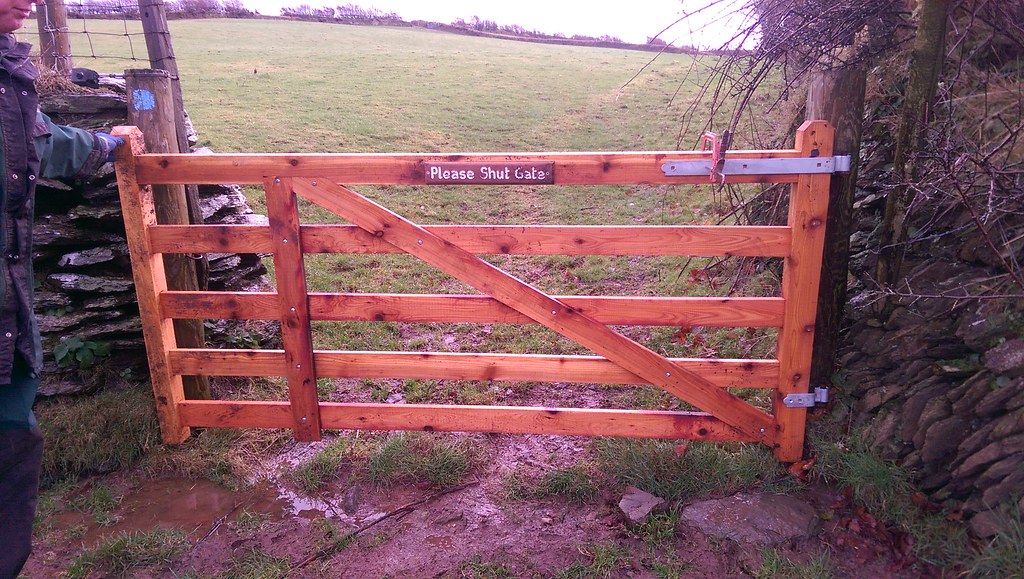 Large fencing staples were used to attach the latch for the gate, it is always good to ensure the latch falls “downhill” so if the gate falls slightly over time the latch will still work.

The fencing staples are positioned and then given a light tap to mark the post and the gate, then pilot holes are drilled using a cordless drill to ensure the staples go into the correct position. 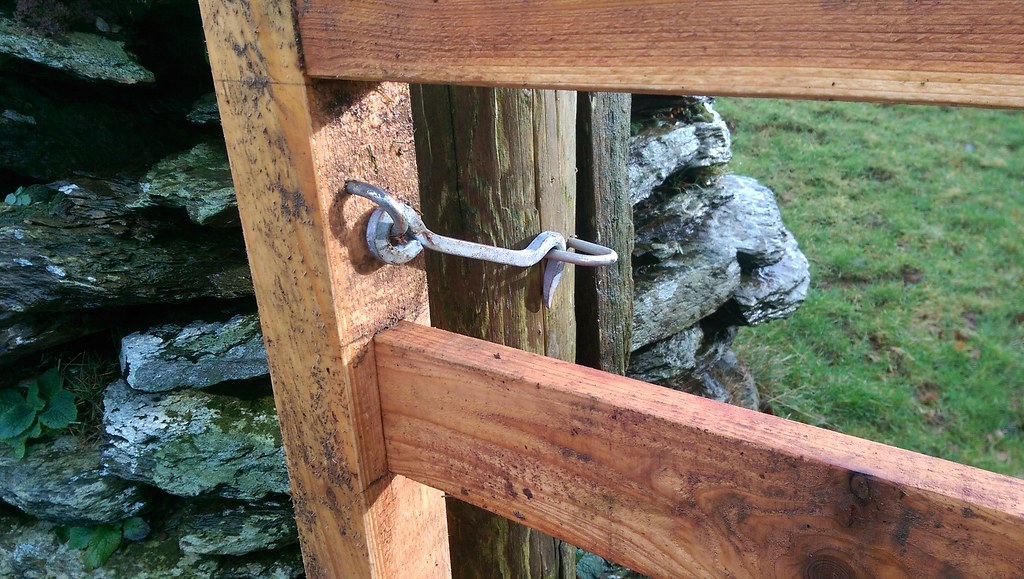 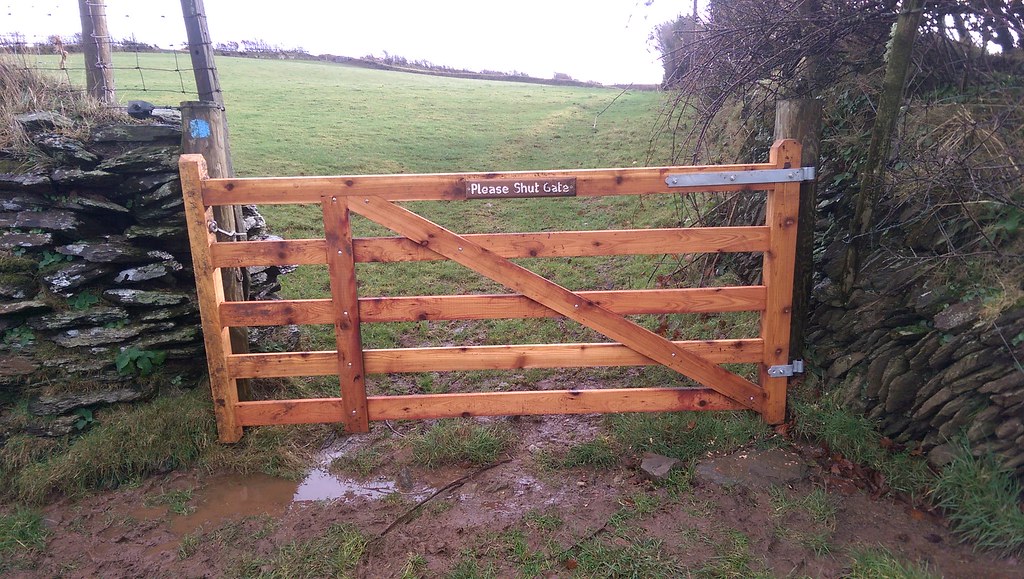 The next gate was down a narrow forest track and the Mule proved the perfect vehicle to gain access to the site.

The old gate was severely damaged. 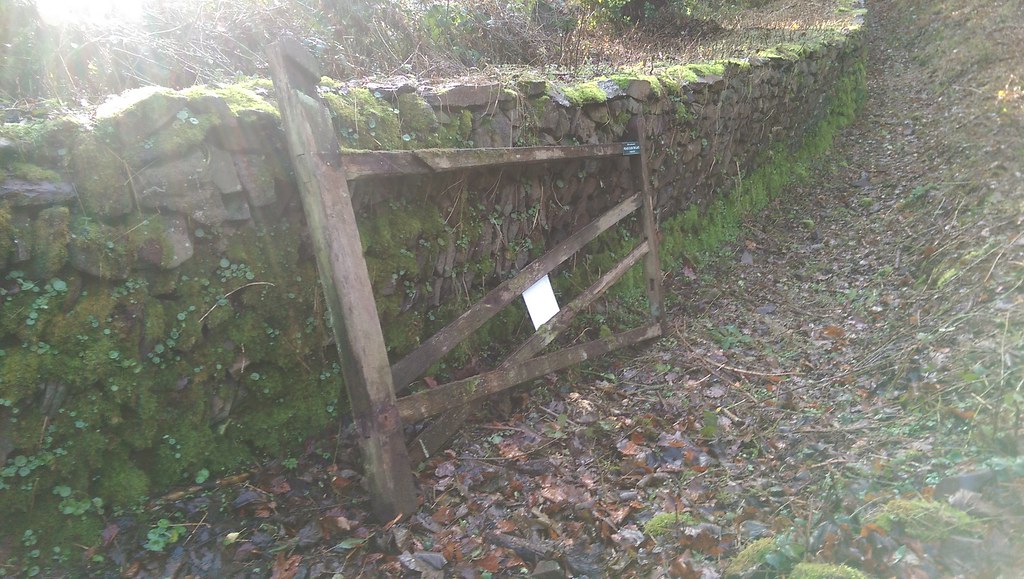 Due to the way the old gate furniture was positioned, it was necessary to take the old fittings off the old gate and fit them to the new one. 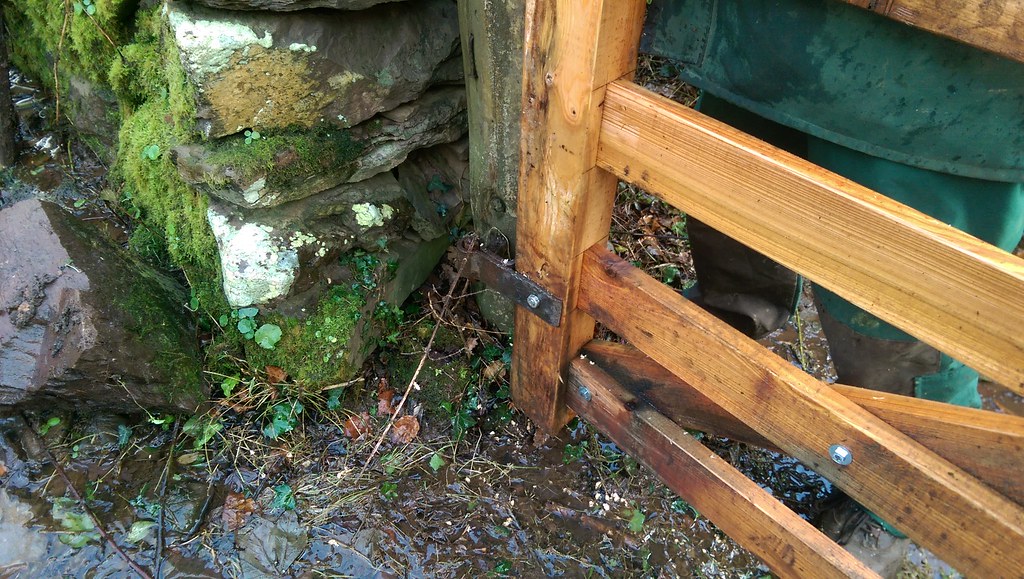 Again, the quick-release clamps were used to hold the gate hasps in place while holes were drilled and the bolts fitted to them. 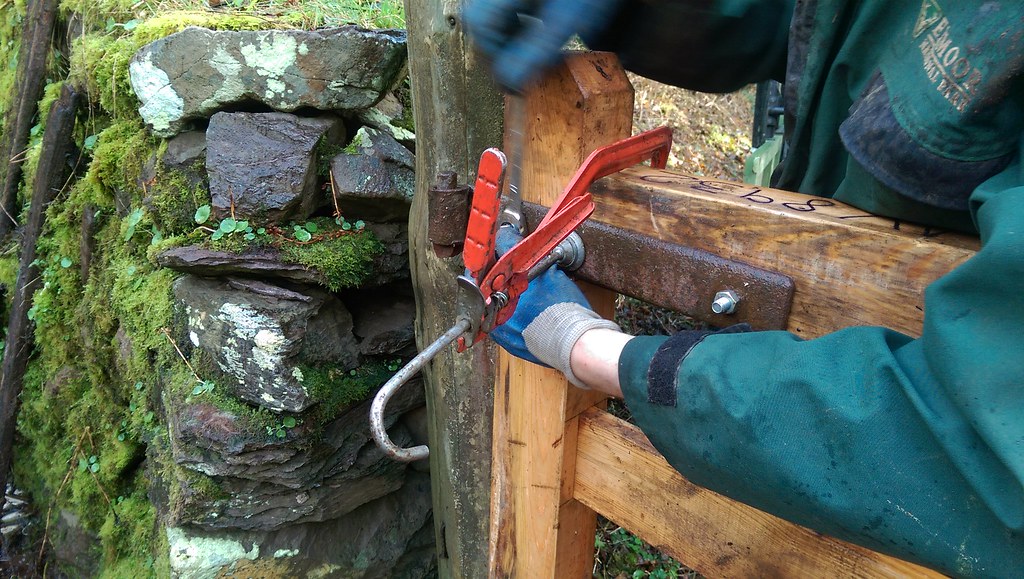 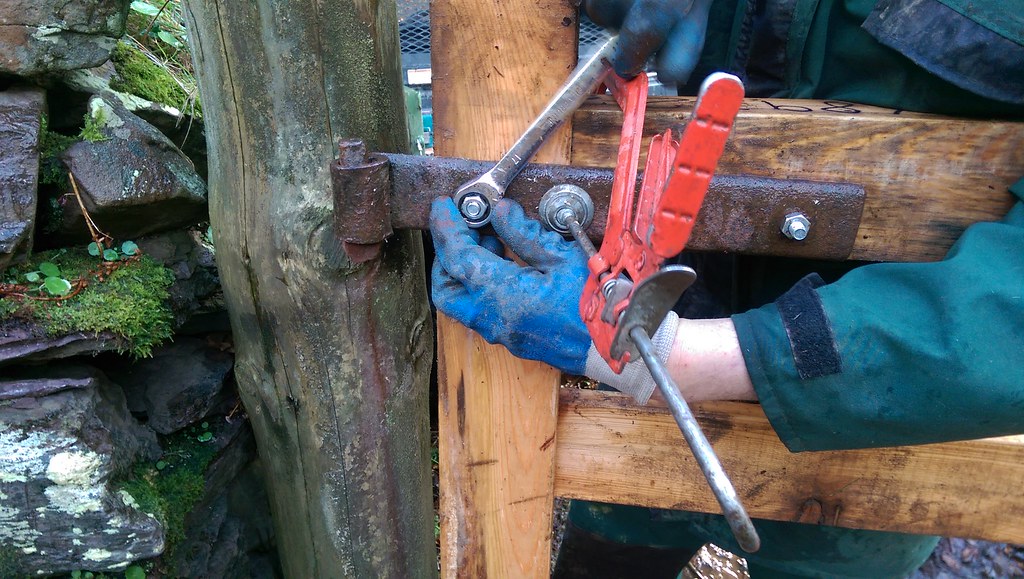 The domed heads were positioned on the inside of the gate so people and animals were not snagged on the bolts when using the gate.

The new gate was positioned carefully to ensure it would fit and a latch could be added. 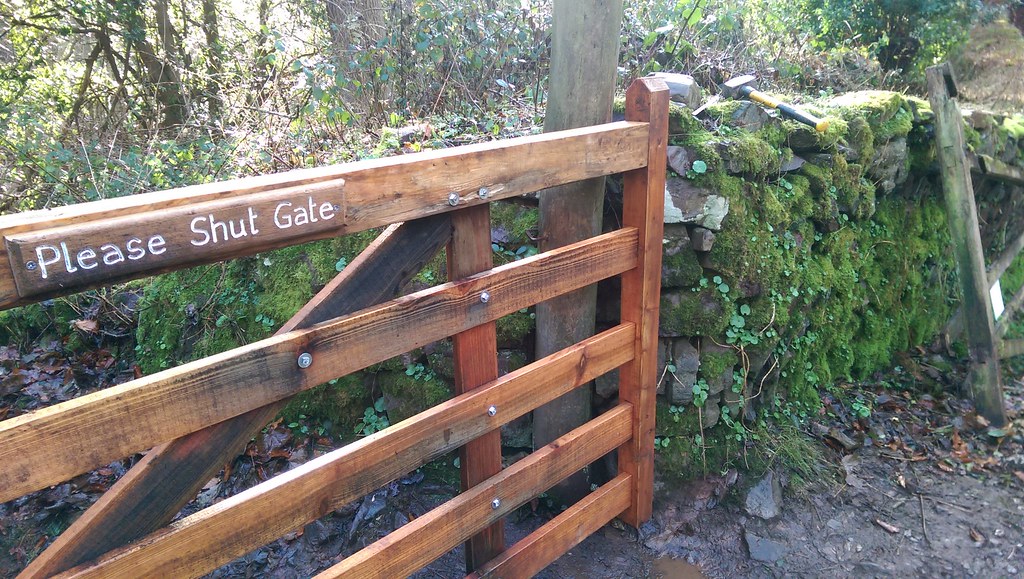 Staples were fitted by positioning them and tapping them lightly with a hammer to mark the position of the holes, then pilot holes were drilled and the fencing staples hammered into place. We decided to use the old gate latch as it had a more rustic look. 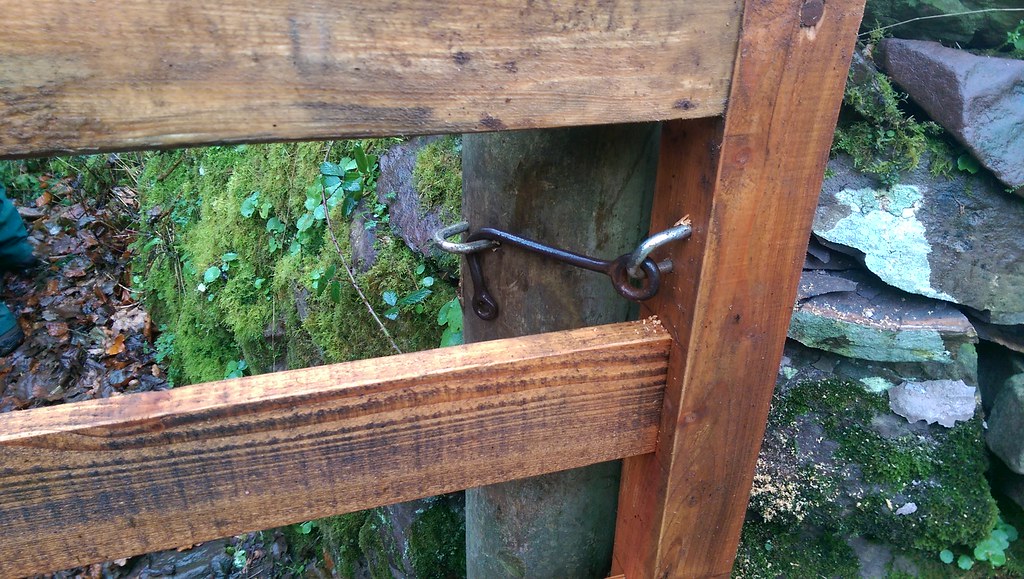 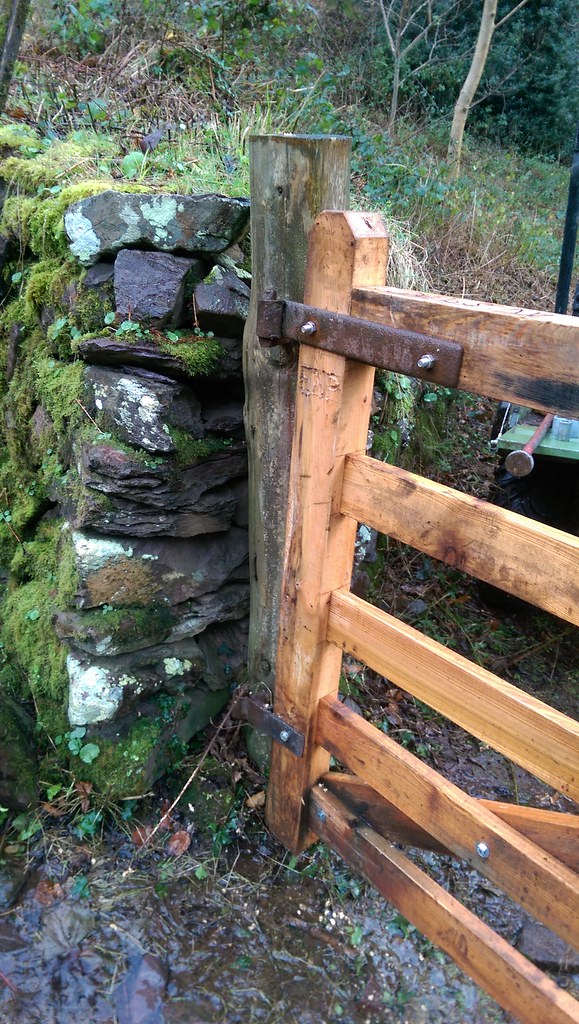 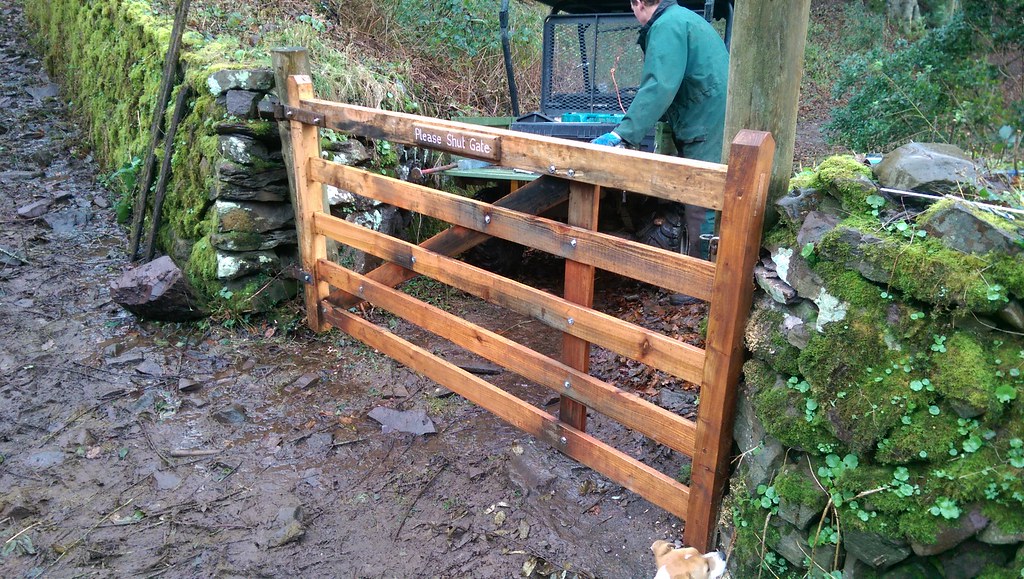